Anything related to video and my tools that is not a support request.
Post Reply
12 posts • Page 1 of 1

DG got hold of another radio and assigned me to restore it! It is a Fada 1001. I really love the burled walnut and general look. No way Nattie can call this one butt-ugly. It has an RF amplifier stage so the sensitivity should be great. Here is the unit from the radio museum. We'll have to see how our unit looks when it arrives. It didn't look terrible online, but we will need to do some cabinet work. This is a hot chassis radio, i.e., one side of the AC line is directly connected to the non-floating chassis (see the schematic below). Finally, guys, I made a dim bulb tester for the initial power-up.

The seller said it powers up and gives static, but no stations. That already tells us a lot: tube filaments are fine, power supply is fine, the audio output stage and speaker are fine. Could be as simple as misalignment or an antenna problem. We'll find out together, as Mr Carlson would say. Alright guys! The Fada 1001 arrived and restoration is underway. It was dead on arrival (contrary to the seller saying it gives static) but I managed to resuscitate the patient. Here is the progress so far:

Upon opening the unit, a cascade of mouse feces and old Hershey's Kisses foil and their paper pulls poured out. I guess the mice made a home in there and stole the owner's candies. I also saw chew marks on the loop antenna board. But interestingly, the unit was entirely pristine. There were no visible repairs or component changes. The radio is smaller than I expected. It almost looks miniature. You can't tell that from the photo above. That makes it cute for me.

Installed a new polarized line cord with neutral to the chassis. This is not a floating-ground radio.

Replaced the burnt out bulb with an led bulb.

Replaced the filter caps and their wires. All three of them tested open with zero capacitance.

Did some resistance measurements and decided to try bringing it up on the isolation transformer/variac/dim bulb tester. Amazingly, nothing exploded and there was no smoke. After ramping up to full voltage, the radio started talking to me. Like Sleeping Beauty awakening after a kiss. But it was after midnight and Daddy made me stop for the day.

Cleaned the volume potentiometer because it was scratchy. It's quiet now.

Replaced the line cap with an X2 safety capacitor. It reduced interference a bit too.

Noticed pops and crackles on the audio. At first, I thought it could be silver mica disease, but no, because these IF transformers don't have silver mica caps. Finally found it was due to very corroded tube socket pins on the rectifier tube. Carefully cleaned them up and squeezed them a little with the pliers to make them tighter. Also cleaned the pins on the rectifier tube itself. No more pops and crackles. The other tubes looked fine so I didn't mess with them.

Noticed that most of the time the speaker seemed fine but sometimes it rattled and whacking it stopped the rattle. So obviously there was debris in there. I had to remove the felt cover over the voice coil and clean debris out of the voice coil-magnet gap. No more rattling.

Did a preliminary alignment.

So now little Fada is doing great electrically-wise. I'm still going to re-cap the paper-wax capacitors and add the dropping resistor to bring the 127Vac line down to 117Vac.

The enclosure is in pretty good shape. When I get my energy back, I'll post some pictures for you.

As a little history, the Fada 1001 is a sister to the famous Fada 1000 "bullet" radios, which are considered highly collectible and valuable. It's sort of the last hurrah for wooden radios.

You can see them together in this old ad: 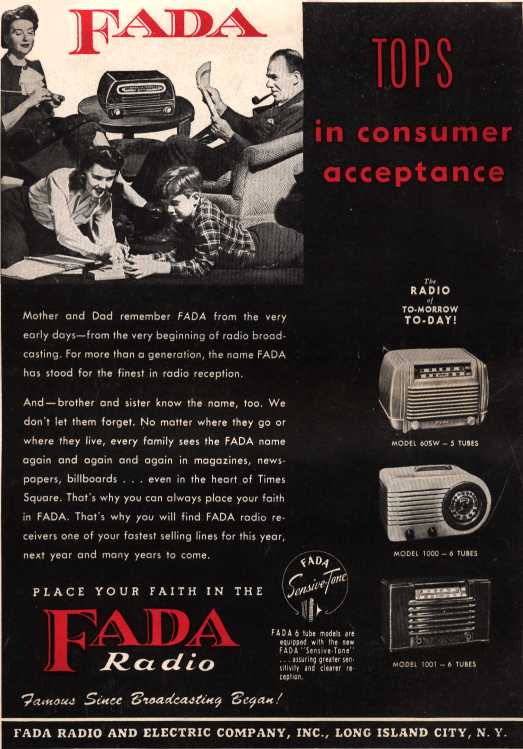 Here's what I mean when I say this radio looks like a miniature. I really like it and, as you can see, the cabinet is in pretty good shape.

There's a 1001 chassis only on ebay for parts. Always want to have spares on hand. But it's $297 dollars, which is ridiculous, considering we got the full radio in good condition for $80. Here's an interesting article about the Fada Bullet radios:

While waiting for the resistor and caps I decided to try to tweak up the audio. You're not gonna get much bass out of a chintzy output transformer and a 4-inch speaker (remember, this guy is miniature), but at least we can make it better. So I put a 25uF cap across the output stage cathode resistor. The shrill quality is gone and it sounds fuller. So gonna leave it in there. Bullwinkle says he likes it too.
Top

Darn, the patient is critical again. She started getting intermittent again after I thought I fixed that rectifier tube socket. But that socket is just gone and I have to replace it. One of the pin grabbers had cracked and everything was corroded. So I ordered a new socket. This should be fun. Hopefully, the rectifier tube itself is OK. We'll see.

Also, DG said no on the cathode capacitor. He wants to hear it in the cabinet before we consider that. He thinks if the engineers had wanted to do that they would have. And really, it doesn't sound so bad with the 4 inch speaker.

EDIT: Some people say the cathode capacitor adds hum. But no, what it does is boost bass gain, so if there is any pre-existing hum, it gets louder. But we have really large filter caps and so the hum is basically nonexistent to begin with and so does not get amplified to anything significant.
Top

Guys, I had a great idea. Instead of using a dropping resistor to drop the 127Vac down to 117Vac, I discovered that there are 45Z5GT tubes that are drop-ins for the 35Z5GT. That will make the heaters run at their designed currents and the dropper resistor will not be needed. It's always better not to modify the radio circuit where possible. We can debate whether subbing the tube is a modification. The B+ voltages will be a bit higher but that should not be a problem. So I ordered three 45Z5GTs, one for the radio and two for stock.
Top

The patient is out of intensive care and has emerged from coma, but we can't release her yet. There is a stubborn heat-dependent intermittency. I think it is a bad tube so have ordered replacements. Also the speaker is not salvageable and will have to be replaced.
Top

After re-capping filter and paper/wax capacitors, replacing out of spec resistors, and replacing all tubes with NOS (new old stock), I still had that annoying pop goes the weasel symptom. When started up cold, everything is fine. After 5 minutes there would be a pop and the volume goes way down. It would pop back in and then pop out, seemingly randomly. Poking and prodding things and tapping and rolling tubes did nothing.

Out of desperation (I really love this radio), I decided to doubt the domino caps (they are mica caps that people say almost never fail). Really, that was all that was left after everything else was eliminated. Long story short there was a 220 pF domino across the volume control (not the slider tap cap to the audio output). When I snipped that the popping intermittency was cured, so it must have been heat-related shorting. What a relief to find that! OK, wasted money on the tubes but they will be useful to have as spares.

Also, as mentioned earlier, instead of adding a line dropping resistor to mitigate the 127Vac local line voltage, I put a 45Z5GT in place of the 35Z5GT. Works great.

Next step, replace the speaker. Then refurbish the cabinet.
Top

Great job, Sherman! I know how frustrating intermittents can be. They're like a software bug that you cannot reliably reproduce. PITA.

And you're right, this radio is a real cutie and a great player. It's very sensitive with the RF amplifier stage, compared to the Philco 48-461.

Update: Got the new speaker installed. Sounds fine. Replaced the shorted silver-mica cap that caused the intermittency. Also replaced another silver-mica cap in the audio section. Painted the dial bracket with gloss white (the area that used to have a degraded white cardboard piece glued on). After an appeal by me, Rocky, and Bullwinkle, DG agreed to the installation of a cathode resistor bypass capacitor. It's pretty normal on lots of sets and really improves the tone. We used 25 uF.

Still to-do: Install the dial string and re-install chassis in the cabinet. Gonna do the touch-up with the chassis installed, as the required work is not extensive.

Little Fada is all done and back together! I failed on three previous attempts to reinstall the dial string. Problem was that I was trying to re-use the old one, which is joined in a loop with a crimp bead. I was going to give up but then I talked to Balti. He told me don't be ridiculous -- back in the day when those radios were made they had a bunch of ladies installing the strings, so if they can do it...so can I. Good point. I thought if the looped cord came off intact it could be put back on intact. Well, it's easy to break glass, not so easy to put it back together again. So I bought some new cord and stringed it one way around the route and then tied it off back at the spring. Easy, peasy. I'm thinking even Curly could have done it.

I touched up the cabinet. Completely refinished the top because the spot over the rectifier and audio tubes was degraded from the heat. I put my metal foil on the inside of the cabinet to stop that from recurring. Replaced the felt on the feet. Put the chassis back in and Bob's yer uncle. Looks great. No need for a photo, because it looks just like the one in the first post, but a little lighter overall, which brings out the grain better.

The next project will not be a simple AM radio. We have eight AM radios sprinkled around already! Thinking of a TV, a shortwave receiver, or an AM/FM radio. DG said his only requirement is that it be of historic interest, look cool and elegant. No ugly stuff.
Top
Post Reply
12 posts • Page 1 of 1