) for some time...
but I was unable to really catch the item in one of the NALs present in the two files which would give away the info which is finally used to determine the "stereo mode" (left eye / right eye first) as it is used in a mkv file...

can somebody give me a hint, please?
thanks!
Top

DGDemux doesn't make any declarations about eye assignments, just demuxes main and dependent streams. Not enough experience here with 3D streams to advise you about conventions for eye assignments. May be better to ask at D9 or VH.
Top

I will look into parsing the eye assignment and reporting it when opening a disk. If there is a tag in the MKV I can report that as well when opening an MKV.
Top

thank you for the link; indeed interesting info; I think the planes of the subs are covered nicely with the Tag-files;

I have scrolled through the MCV-SEI (and the others) as far I could manage it...
but have not found a clear indication from which data this right/left-issue could be resolved; also MediaInfo in the debug mode gave no hint...
maybe it can only be pulled from the BD itself;

I'm concocting a primitive mkv-wrapper to pack the 264 and mvc files into a mkv for later use with MKVToolnix; to know for sure the right/left would be nice; at the time being I have hardwired "left" (I think most are left; in the cases where this is wrong it can still be manually corrected with MKVToolnix);
if there is no "natural" place for it in one of the NALs then also an extra file (like an empty "right.txt") would be ok...

Please re-download 1.0.0.58 and update DGDemux.exe. When you open a 3D disk it will show the eye assignment on the streams list.

Do you need anything else?
Top

that looks good, Thanks ! 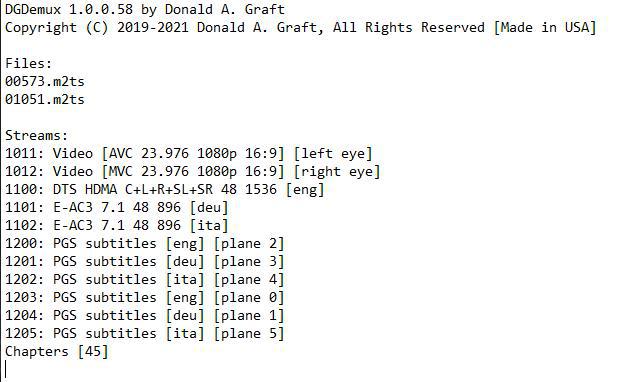 with my mkv wrapper I'm parsing from NAL to NAL (obviously) but this disc tripped the algorithm because around 1,5% progress, it encounters a NAL "0x00 00 01 0A" which I thought marks the end of file...

maybe there is some kind of "spill over" from those unexpected m2ts files causing this problem?
I have implemented a work around for this situation, so not overly critical (I hope).

So, thank you again for the update
Top

Thank you. For future reference, place links within the url tag (use the link button) otherwise they will not appear.
Top

ok;
shall I do it again, or did you manage somehow?
Top

I edited your post to add the missing url tag.
Top

I tried the US version because the one you linked is 3 times the cost. But this one has different M2TS files than what you showed.

Can you please post a link to the MPLS file from your disk? Also, give your exact DGDemux command lines.

Finally why are your two displays different colors? Looks like you did something different between listing and demuxing.
Top

sorry for the delayed response; I was out of town;

the black background is the output of the cli in cmd.exe during ripping;
the white background is a txt file: I divert the mpls analysis into a file in order to parse it and to create a command line for DGDemux.exe;

I sent you the link via PM; its a zip with the mpls and the analysis txt where I have put in at the very end the complete command line for DGDemux;
Top

Thank you. I also need the command line for the open MPLS listing.
Top

you mean the command line creating the mpls analysis?...
I used:
apps\DGDemux\DGDemux.exe -i "G:\BDMV\PLAYLIST\00800.mpls"
Top

Aha, noticed in the MPLS that it is a 3D disk, then I checked your streams listing and yes, it is. That's good because that means there is no problem. The M2TS list shows only the base stream files. When demuxing, however, after each base M2TS in the list it also demuxes the corresponding dependent stream file if enabled for demux. I can differentiate the two when displaying the names during demux.
Top

It is end of sequence. I cannot tell you why it is there. DGDecNV ignores them. I don't know what other software does with them.
Top

If you re-download build 58 it will show base versus dependent when displaying the M2TS files being demuxed (for 3D disks).
Top
Post Reply
23 posts • Page 1 of 1